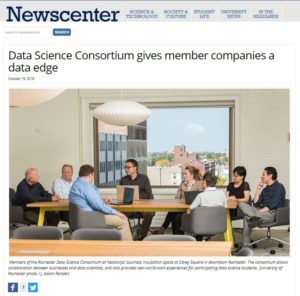 John Loury and Michael Sutton want to provide their business clients with data-driven marketing strategies at a level of sophistication competitors can’t match.

That’s why Henrietta-based Cause + Effect Strategy and Marketing (CESM) is among a growing number of companies that have joined the Rochester Data Science Consortium founded by the University of Rochester.

“We’re really big on transparency and follow-through,” says Loury, CESM’s president. “We say we can deliver high-end, predictable, prescriptive analytics to our customers, and our partnership with the consortium helps us to deliver on that.”

In 2017, the consortium was given $7.5 million in New York State funding to demonstrate it can help create “high-value, knowledge-based” jobs in Rochester and further the region’s development as a high-tech hub. Consortium staff do this primarily by working hand in hand with companies to address their data science challenges.

Already, Johnson says, he is beginning to accrue non-state revenue from corporate partners and projects to sustain the consortium and its staff after the state funding expires.

“This is what I’m most pleased about,” Johnson says. “This shows that the state’s investment is going to live on.”

When he started as director in August 2017 Johnson was the consortium’s sole employee with two founding partners on board: Harris Corp. and the University itself.

Since then, the consortium has:

So, priorities are now shifting for Johnson. He wants to build connections with more University faculty who might be able to lend their expertise in data science—and perhaps benefit from corporate-sponsored research.

And instead of worrying about attracting partners, he can now focus on managing a robust pipeline of projects. 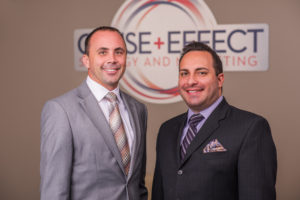 CESM is a good example of how a company and the consortium work hand in hand. The marketing intelligence company uses data analytics to develop marketing strategies for more than 30 clients, including Xerox, Briggs and Stratton, and PGA of America.

The company, which has 10 employees, began working with the consortium on a project-by-project basis four months ago for two reasons, Loury says.

For example, one of its clients wants to expand sales of its product nationwide. CESM collected and prepared large, detailed data sets showing how various competitors’ sales had changed in areas where the client had already successfully introduced its product. They gathered similar data on sales trends from other areas around the nation.

The consortium’s scientists then developed algorithms to identify in which of those other areas the combinations of competitors and sales trends, among other variables, were most similar to those that existed in the areas where the client has already been successful. This helped CESM predict areas where expansion might be most likely to succeed.

Sutton, the company’s vice president for client service, says CESM looks forward to working with the consortium on more projects. For example, they would like to develop an algorithm that more accurately attributes which parts of a company’s marketing effort – social media, radio, television, or print — are having the largest impact on sales.

“From a leadership perspective, Walt (Johnson) and Karla (George, director of operations) have been fantastic. They’ve been very interested in helping us, and in checking to make sure things are delivered as promised.”

The consortium’s scientists, Sutton says, “have always been excited to dig deeper. I never got the feeling that there was frustration when the data wasn’t supporting something we were hoping to accomplish. Instead, we were constantly pivoting to new questions we could ask.”

Thanks in large part to its partnership with the consortium, CESM is hiring two new data-science employees this fall, and will likely add a third next year, Loury says.

And that’s what makes Johnson happiest of all.

“The point of the consortium isn’t to hire a bunch of scientists at the University of Rochester,” he says, “but to attract more people to the region for high tech jobs.”