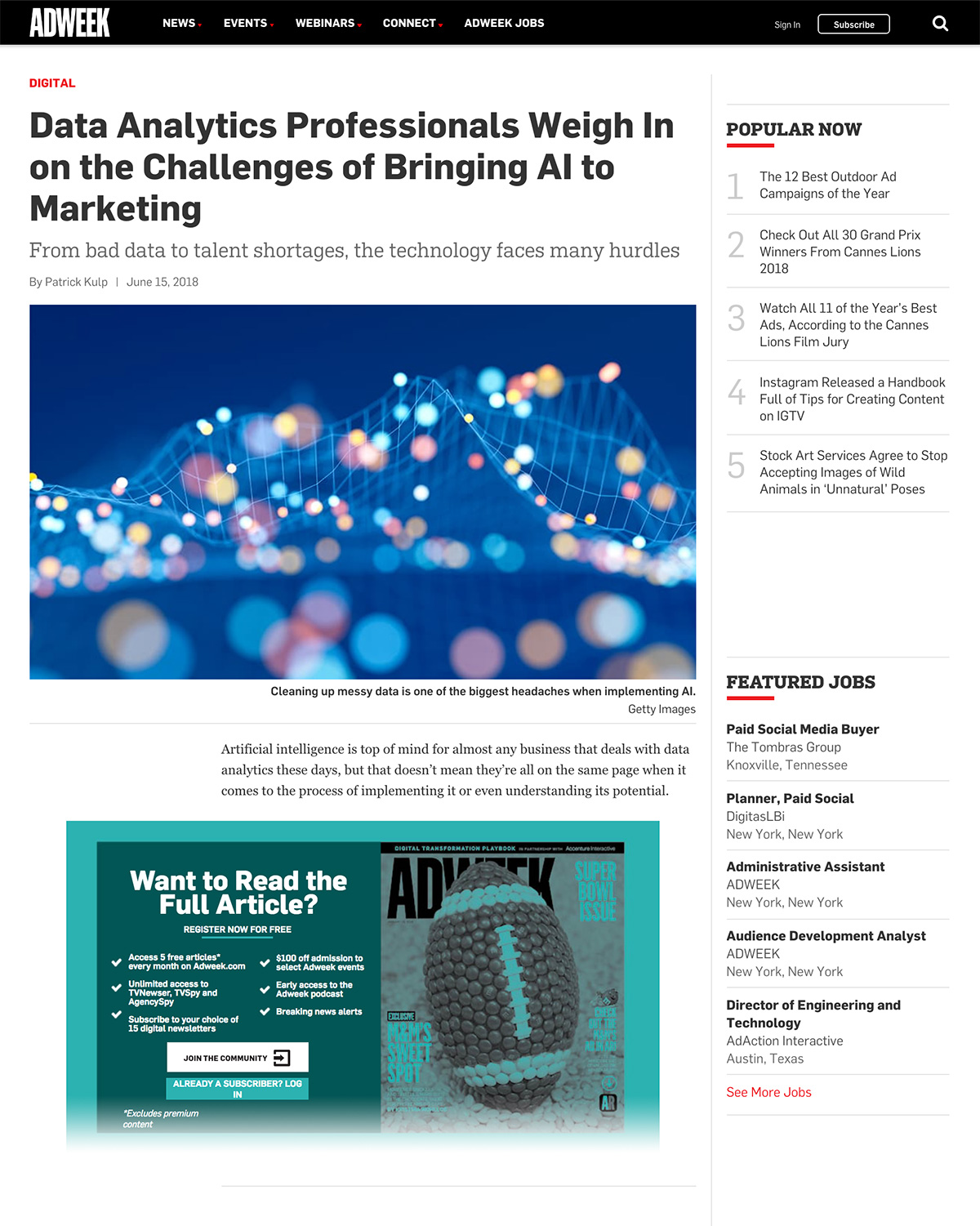 From bad data to talent shortages, the technology faces many hurdles

Artificial intelligence is top of mind for almost any business that deals with data analytics these days, but that doesn’t mean they’re all on the same page when it comes to the process of implementing it or even understanding its potential.

We spoke to three business leaders in the space at a recent conference hosted by analytics software firm Sisense about the difficulties of teaching people about AI, refitting aging systems to handle new tech and expanding the collective imagination of what’s possible.

Here’s what each of them said when asked about the biggest AI-related challenge currently facing the industry.

“Today, with legacy technologies, getting the right data and the right data sets together is a pain cave. I know that because we work with data partners and they tell us their data teams spend 80 to 90 percent of their time dealing with a data mess versus what they’re hired to do which is AI, data science, predictive technologies–that’s the big thing. The more you can shorten that gap from messy, complex, chaotic, ugly data to something the AI can digest, the more value you can provide people. It’s a big thing for companies at any size.

Number two is talent and that is not going to be solved. People think it’s going to be solved, that’s a false hope, and I’ll explain why. The number of data scientists and that includes AI in the same bucket doubled in the last 4 years. Let’s assume we do really well and double it in the next two years and then we do that again in the next one year after that. We’re still tremendously behind the need of the market–not 10 percent behind, hundreds of percent behind. The only way to solve that is to make the technology versus the people smarter… That would allow doctors and nurses and truck drivers and shift managers and factory workers to leverage AI and data science versus making them do a Ph.D. It just doesn’t make sense.

The last one has nothing to do with technology; it’s about creativity. Most businesses’ DNA is not a data-driven DNA, and even when you give them this amazing tool, they’re not creative enough in using it. I’ll give you an example. We have large financial institution that used to have static, ugly main-framing ports built over a decade of smart people working hard to build it. We put in their hands the most advanced AI toolkit in the market. Guess what was the first thing they asked. Can you create the same exact report as the mainframe? That’s the wrong question–That’s totally the wrong question. It’s like replacing a train with a plane and asking the plane to go on tracks. It’s not that they’re not smart. It’s that their mind is locked down in a certain way and it’s about reimagining the business process. It’s very, very different.”

“There’s two different things we’re seeing. The first is that when you think about a voice-enabled or natural language-enabled interface … It’s hard to get people to believe that it’s real, first off. So I think there’s a really big problem where we’ve been doing visualizations for so long as the primary way of understanding data.

The second issue is that we’re now in the world of Siri, where you’re asking how to get home or asking for a favorite movie. The content just has to be somewhat right most of the time. In business, we’ve found that every single time a story is written based on data automatically, it has to be 100 percent traceable back to the data and the logic and a lot of times, machine learning processes are pretty black-box. And so we work in very regulated industries like financial services and government, and there’s just no margin for error and an incredible need for transparency, which is what we’ve seen has slowed down a lot of adoption. Our technology thankfully is very transparent but most technologies are still struggling with that.”

John Loury, president at CAUSE + EFFECT Strategy and Marketing

CESM works with clients to create marketing and analytics strategies, including bringing voice-driven data interpretation to agencies and advertising departments.

“Where we see a big gap is in the marketing and advertising industry. There is a huge disparity between individuals who are at the tip of the spear, who are ready for using AI, especially when it comes to data analytics and then customers who are still really in the early dashboarding phase. And this delineation isn’t necessarily based on revenue.

We have Fortune 500 companies that are still asking for basic metrics in their dashboards … So having tools like Narrative Science allows us to create a benchmark. It is acting as this ‘junior data scientist’ who is at least getting people thinking about KPIs and how they’re performing. Whereas before, we’d have to get the analyst in here to get us to that dashboard. So things are a lot faster, and AI has really enabled that. We are pushing these AI-type services within dashboards with every client because that is where we want to get them to. The biggest hurdle is identifying where they are in that continuum.”