When John Loury and Mike Sutton moved back from Buffalo to start their own analytics company, they had a business concept and an implementation strategy, but not much else for their enterprise.

They didn’t even have desks.

They’ve come a long way in three years, however.

On January 12 they celebrated their third anniversary at Cause + Effect Strategy and Marketing (CESM) by closing the office to savor a dynamic 2017 of client growth and rising revenue.

“To go from starting a business in an empty room with two picnic tables, to being able to be a profitable company that’s growing not only in people but in technology, it’s all very exciting,” said Loury, the president of CESM. “This is winning the Super Bowl for us.” 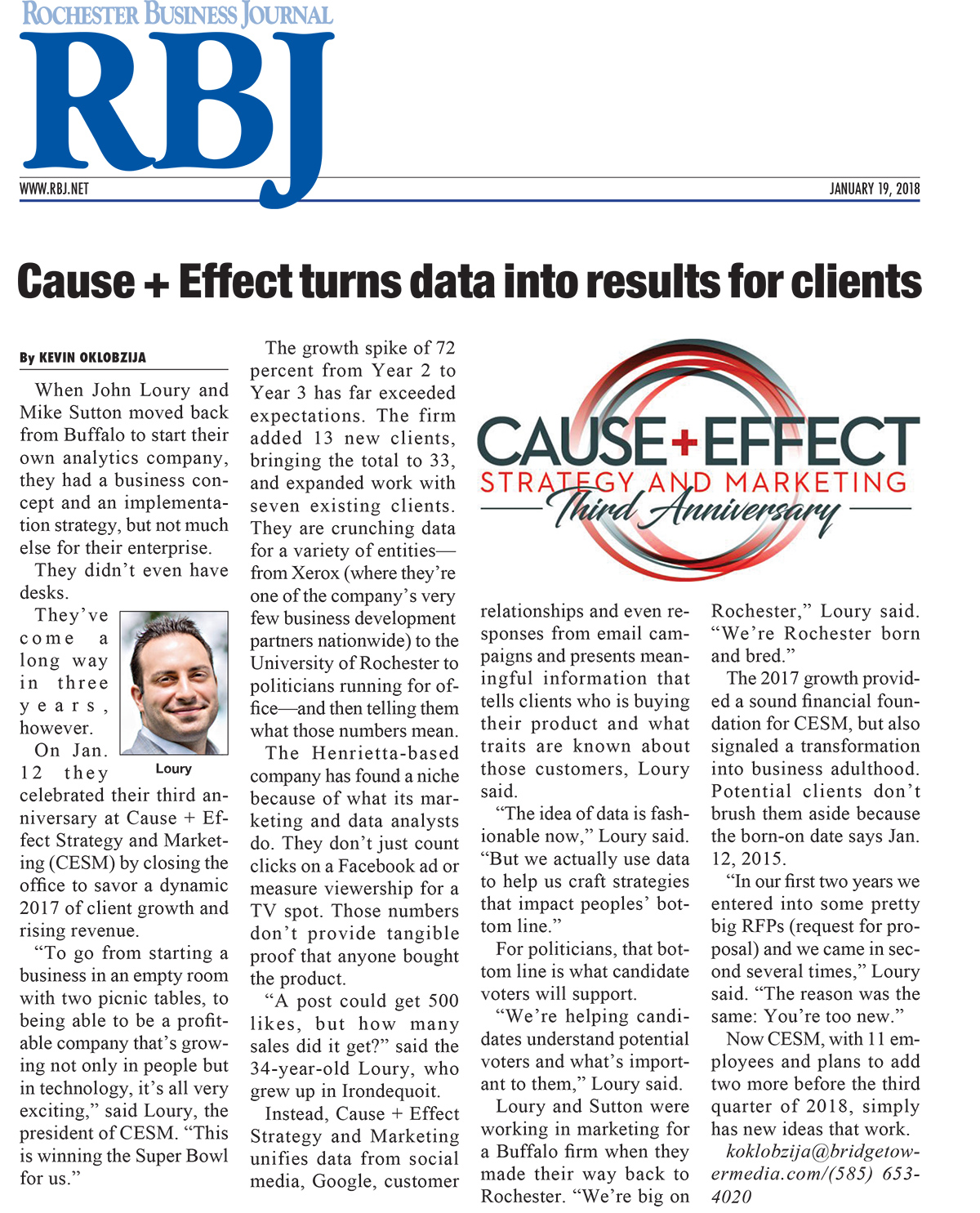 The growth spike of 72 percent from Year 2 to Year 3 has far exceeded expectations. The firm added 13 new clients, bringing the total to 33, and expanded work with seven existing clients. They are crunching data for a variety of entities— from Xerox (where they’re one of the company’s very few business development partners nationwide) to the University of Rochester to politicians running for office—and then telling them what those numbers mean.

The Henrietta-based company has found a niche because of what its marketing and data analysts do. They don’t just count clicks on a Facebook ad or measure viewership for a TV spot. Those numbers don’t provide tangible proof that anyone bought the product.

“A post could get 500 likes, but how many sales did it get?” said the 34-year-old Loury, who grew up in Irondequoit.

Instead, Cause + Effect Strategy and Marketing unifies data from social media, Google, customer relationships and even responses from email campaigns and presents meaningful information that tells clients who is buying their product and what traits are known about those customers, Loury said.

“The idea of data is fashionable now but we actually use data to help us craft strategies that impact peoples’ bottom line.”

For politicians, that bottom line is what candidate voters will support.

Loury and Sutton were working in marketing for a Buffalo firm when they made their way back to Rochester. “We’re big on Rochester,” Loury said. “We’re Rochester born and bred.”

The 2017 growth provided a sound financial foundation for CESM, but also signaled a transformation into business adulthood. Potential clients don’t brush them aside because the born-on date says Jan. 12, 2015.

“In our first two years we entered into some pretty big RFPs (request for proposal) and we came in second several times,” Loury said. “The reason was the same: You’re too new.”

Now CESM, with 11 employees and plans to add two more before the third quarter of 2018, simply has new ideas that work.